Iconic Artworks to see in the Tate by Black Artists 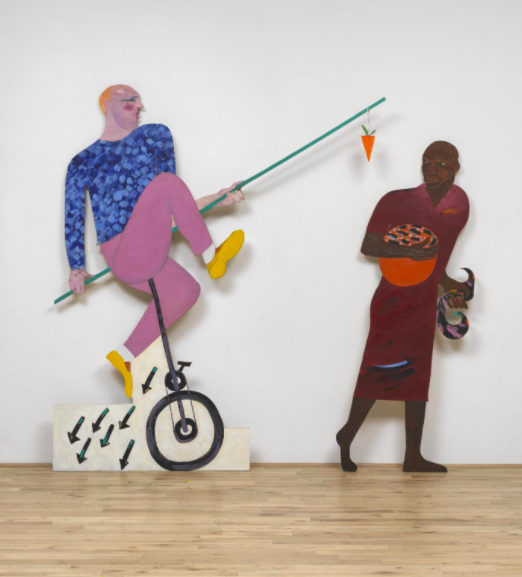 Iconic Artworks to see in the Tate by Black Artists

Spend an afternoon this Black History Month appreciating some of the most iconic artworks by Black Artists in the Tate. Have we missed any? Please let us know in the comments.

This large, striking painting depicts the profile of a woman crying. The painting is vibrant with abstract patterns scattered across the canvas. The woman wears a pendant which is created from elephant dung, a material that is commonly used by Chris Ofilli. The tears of the woman have collages of a boy’s face inside, and written across the canvas are the words ‘RIP Stephen Lawrence 1974-1993’.

The carrot piece depicts a white man trying to tempt a black woman with a carrot. The woman’s arms are already filled with everything she needs. Himid states this piece represents the patronising offers Black Women are made by certain cultural institutions to be seen to be culturally diverse.

Many of Yiadom-Boakye’s paintings address the lack of black representation in European and North American portraiture. Lynette has a figurative style and paints ‘imaginary’ people to add the the ambiguity of her paintings, this concept is also enhanced with the figures unclear surroundings.

This is a collective of archival footage, showing clips from the 1984 Hansworth Riots combined with footage of men singing on the HMS Empire Windrush and images of the local community discussing reasons for the violence. The films discusses how the riots were a result of years of systematic injustice. The film is directed by British artist. John Akomfrah.

Sonia Boyce is an Afro-Caribbean artist living and working in London. Boyce’s work involves a variety of media from painting, print, photography, video and drawing.

Missionary Postion II is an exploration of British Society in the 1980s. Boyce was the model for both figures in the painting, the praying figure indicates a passive acceptance of white culture. Whereas, the figure on the right, proposes more dominance in society.

Predecessors is a two part mixed medium artwork, Crosby used acrylic, charcoal, pencil and acetone-transferred prints to create this piece. The woman that is depicted in the left panel, is a character that appears in many of Crosby’s works – she is the artist’s alter ego. This woman is ‘Afropolitan’ a term that is given to modern people who have been brought up in a number of different cultures. The figure is sat in a living room that is very typical of houses in the late 1970s, which would have been the sort of home Niedeka Akunyili Crosby would have been brought up in.

The right panel displays a kitchen with several utensils which belong to Nigeria’s history. Both panels are collaged with family photographs. The artwork references heavily the artists upbringing of being Nigerian born, then being brought up in LA.