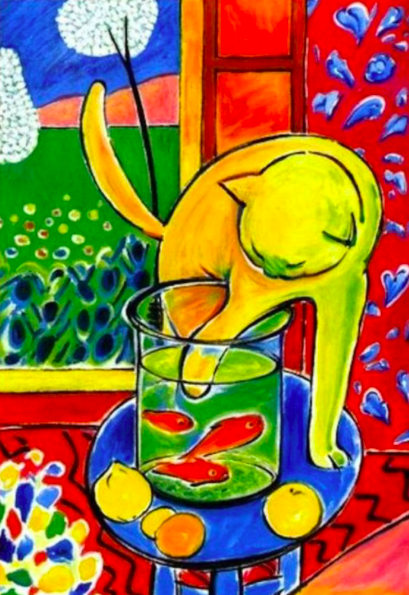 The 8th August is none other than International Cat’s Day! So let’s show appreciation for our little furry friends by looking at Cats in Art over the years.

To start this article, I wanted to write about what is arguably one of the most famous paintings featuring a chat. Le Chat Noir is by French artist, Théophile-Alexandre Steinlen. The painting was actually made to be a poster for a Parisian entertainment establishment with the same name. The venue was to be one of the first cabaret nightclubs, which become iconic in Paris’s Montmarte district.

The Gayer-Anderson Cat is on display at The British Museum, it is a bronze figure depicting the Egyptian Goddess, Bastet. The sculpture dates all the way back to 600 BC. The figure was donated to the British museum by Major Robert Grenville Gayer-Anderson who was a keen collector of Egyptian artefacts. It is believed the sculpture came from a temple where people would donate statues to communicate with the Gods. You can view a 3D image of the statue via The British Museum website here.

Henri Matisse – The Cat with the Red Fish

Matisse was a big cat fan, he was photographed with his feline friends often. He spent the last few years of his life bed ridden form his battle with cancer, this is perhaps why he spent so much time with his cats.

So there is no surprise that cats feature in many of Henri Matisse’s artworks. This is one of my favourite Matisse paintings; I enjoy the level of figurisim (for Matisse) contrasted with the patterns and skewed perspective. The cat curiously dipping his paw into the fish bowl, is the main focus of this painting.

Frida Kahlo – Self Portrait with Thorn Necklace and Hummingbird

Frida Kahlo was known for having a hard life. An accident during her younger years caused her to spend most her life bed ridden. Spending much of her time alone, Frida turned to painting. Kahlo often expressed sadness and loneliness through her art, but liked to reference the things in life she did love, which was natural, and animals. Self Portrait with Thorn Necklace and Hummingbird has a black cat sitting on Frida’s shoulder. This was painted shortly after Frida’s divorce with her husband, Diego Rivera, the cat may symbolise bad luck in this painting.

Want more? Check out the UMA’s History of Cats in Art Virtual Exhibition!

Amsterdam’s Kattenkabinet museum is filled to the brim with paintings of cats. As they had to close their doors during lockdown, they have put the exhibition online. You can click your way through the museum and ponder 75 cat paintings – what more could you want? Click here to visit.