How can we all support Black Lives Matter? 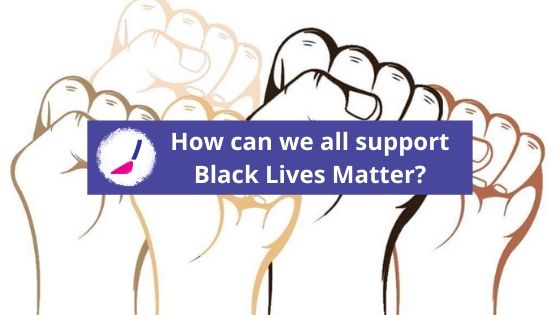 How can we all support Black Lives Matter?

The Black Lives Matter movement was set up to campaign against violence and systematic racism against black people.

On Monday 25 May, a 46-year-old African American man named George Floyd was killed by a white police officer in Minneapolis, Minnesota. The officer knelt on Floyd’s neck as he struggled to breathe.

Since then protests have erupted worldwide, #BlackLivesMatter is rightfully trending all over social media. People want justice and people want change.

In the UK it’s easy to distance ourselves from these violent acts, but we are in no way innocent. Racism and police brutality toward POC are not unique to America.

“Only because this was filmed, and people rightfully rioted, has anything happened. But it will happen again, in the U.S and the UK. It’s only a matter of when.”

The list of black people killed in police custody in this country is not short of names – Rashan Charles, Mark Duggan and Daniel Adewole are just three of a very long list. Our country has repeatedly shown a lack of regard for black lives – and it’s about time we acknowledged this and did something about it.

“Feel uncomfortable? Good! That’s how we feel every day, especially when we are near police.”

For white people, this means we must be more than “not racist” we must be actively anti-racist.

“That police officer isn’t just one bad cop. It’s the mandate given to him by systemic racism and oppression built over centuries.”

The # may fade, but the problem never will until we take steps every single day. Keep communicating, listening and learning. We must take action. Don’t let this momentum stop.

Below are a few book suggestions to get you started…

The good immigrant- By Nikesh Shukla

If you can, please donate to some of the organisations working hard to fight these injustices such as Black Lives Matter UK, The Stephen Lawrence Charitable Trust and Stop Hate UK.

All quotes have been taken from a powerful status written by PopUp Painting team member Jarelle Francis. Here are his words in full: