What YOU Told us about your Social Habits 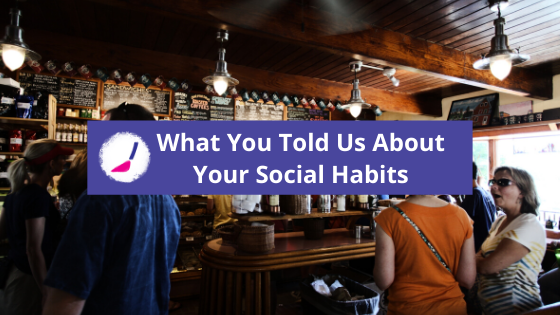 What YOU Told us about your Social Habits

A couple of months back we sent out a questionnaire asking about your social habits, and we were delighted when 200 of you filled it out for us.

The reason why we decided to do this is because we’ve noticed a change in the way people spend their money, certainly shifting from buying materials things to wanting to get experiences with their money. We’ve also seen a change in people spending less on ‘big nights out’ and spending more in the experience economy.

Here are some of the interesting things we found out;

Food hasn’t gone out of fashion

Dinner seemed to be the most popular thing to do for a night out with 93% of you saying thats how you’d like to spend an evening.

60 participants said they liked to do workshops when they go out, the profile for these people tended to be female, likes to go out 0-10 times a month, and most likely to spend under £100 on a night out.

The rise in experience events

There seems to be a higher interest in experience economy events with 11% said they go to lectures, 23% partaking in immersive experiences and 30% who said they often like to do workshops. This is in comparison to only 8% saying they liked to go clubbing.

How much are you willing to spend on a night out?

People Who Spent Under £50 on a night out.

This was interesting as spending less on a night out seemed to be more common amongst our younger and old participants. With 72% of 18-24yrs and 64% of over 65yrs stating this applied to them.

To spend money on going out or on material things?

When we asked you what you’re most likely to spend your money on, 50% said you’d rather spend money on going out, 21% on material things and 28% said you spend an equal amount of money on both.

The breakdown of people who spend most their money on going out:

The strong preference to spend money on going out was consistent in every ages group. 25-34yrs seemed to be the group that preferred to spend money on experience with 61% saying this statement applied to them. Only a third of 55yrs-64yrs said this is how they spend their money.

You’re most likely to go out with friends or partners.

Socialising is the main reason to go out.

A huge 86% of you said socialising was one of the main reasons why you go out, and 70% said it was to relax.

How do you hear of things to do?

68% Of you said you hear of things to do via word of mouth, with 54% said Facebook was a useful way of hearing about events with Instagram just behind with 43%. 39% of you said Google.

Money is a big factor to prevent you going out

57% of you said lack of finances was a reason why you wouldn’t go out. With 44% said you’re often too tired, and 43% said work commitments hold you back. A quarter of you said you sometime just rather stay at home, 24% said the weather was a factor.

And where do you get your news?

77% of you said you got your news from BBC, with the Guardian being the second most favourite paper with 31% reading it.

Who filled out our questionnaire?

A majority of our participants worked in the Healthcare, Finance, Education and Creative industries.

83% indentified as being a woman.

Thank you to everyone who partook in our questionnaire, we hope to see you at a PopUp Painting event soon.