The Story of Chinese New Year 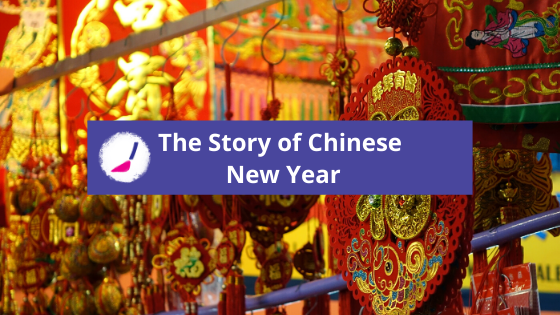 The Story of Chinese New Year

The Chinese New Year is the celebration of the New Year in the traditional Chinese calendar and normally referred to as The Spring Festival in mainland China. The New Year falls on the New Moon between 21st January and 20th February.

The Chinese New Year is associated with many myths and customs. Families normally throughly clean their house, to sweep away any bad fortunes and the give money in red envelopes for good fortune.

There is a Chinese zodiac which runs on a 12 year cycle, naming each year after an animal. The animal of the year you were born in means you share personality traits with the said animal. This came from an old story about the Jade Emperor’s The Great Race.

It was believed that the Jade Emperor thought there should be a way of measuring time. On his birthday he called a swimming race and asked the animals to take part. They were told that the first 12 animals to finish the race would have a year named after them.

As the animals prepared for the race, the cat and rat got worried as they were not very good swimmers. They asked the ox if they could climb on his back, which the Ox said he would.

The Ox started to take the lead, but towards the end, the rat pushed off the cat into the water and left onto the bank to finish the race first. The first year of the zodiac is now named after the Rat, with the second being the Ox.

The tiger came in at third place, despite being tired swimming through the strong currents. Forth came the rabbit, who hadn’t swum at all but had found stepping stones and logs to cross the river.

The dragon then landed after flying in fifth place. The emperor asked what took him so long if he didn’t need to swim. The dragon explained he saw that people and animals needed to drink, so he made it rain for them. He then saw a little rabbit trying to cross the river so he blew some air so a log would take the rabbit to the riverbank.

The horse then appeared to be coming in at sixth place but then the snake snuck in front, startling the horse in his tracks. The same became 6th and the horse seventh.

The dog then came in at eleventh place, the emperor was surprised the dog had taken so long as he should be the best swimmer. The dog said that he wanted to bath in the water as it was so clear.

In twelfth place came in the boar. He told the emperor that he stopped to eat and sleep on route. The cat finally crawled out of the water, and was too slow to make the first twelve places. He was so angry at the rat for the way he cheated and since then rats and cats have never been friends.

This is the story in Chinese legends of the Chinese zodiac, the animal of the year you’re born in is meant to represent your personality traits based on the way the animals behaved in this story.

You can find which animal your birth year is here.