7 Things that you didn’t know about Halloween 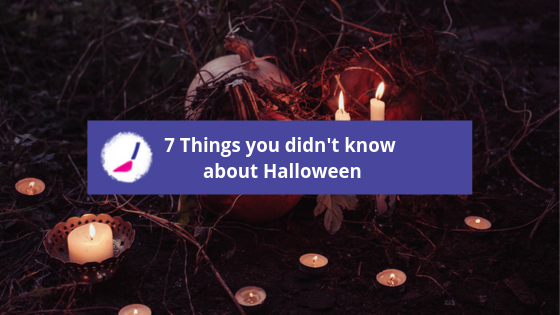 7 Things that you didn’t know about Halloween

It’s the spookiest time of the year! Here is a few facts that you may have not known about everyone’s favourite Pumpkin fuelled holiday, Halloween.

Halloween is a combination of Samhain and Feraila

Samhain was celebrated by ancient Celtic people, which was a festival marking the end of the harvest season. They also believe it was a time they believed the boundaries between the living and dead were blurred and ghosts would visit the earth.

Feralia was celebrated on a day late in October, which honoured the dead and the Roman Goddess of fruit and tree’s. When the Roman Empire conquered the Celtic people the two holidays became combined.

1st November is the Catholic holiday of All Saint’s Day (or All Hallow’s Mass) which celebrates those who have gone to Heaven. The following day is known as All Soul’s Day celebrates people who have died but have not yet reached Heaven.

These together, have contributed to what we know as Halloween.

Fancy Dress was used to hide from Ghosts

As the Celtic’s believed the earth was filled with spirits at this time of year, they used to wear masks if they left their home after dark. They believed the ghosts would think they were fellow spirits and leave them alone.

To keep the ghosts from entering their homes, they would place a bowl of food outside to keep them happy. Whereas during the Catholic All Soul’s Day, poor people would knock on people’s doors asking for food in exchange for prayers for the Home’s Dead relatives. As you can tell, this seems to be where Trick’n’Treating originated from.

The Story of the ‘Jack O Lantern’

According to a Celtic story, Jack was a man who tricked the devil many times. So once he died, the Devil punished him by banishing him both from Heaven and Hell and making him roam the night with only a burning coal to lead the way. This coal was placed in a carved-out turnip. The Celtic people used to carve out turnips with scary faces and place them at the window to scare away Jack or any evil spirits.

Pumpkins were only used once the immigrants moved to America and this was a more common vegetable over there.

During the Samhain celebrations, priests would light a huge fire to represent the sun returning after the Winter months. Bones of cattle would be thrown into the flames, calling this a ‘Bone Fire’. Which we know today as a Bonfire.

The Romance of Halloween Games

Apple Bobbing, a well known traditional Halloween which originates from Colonial America game was actually used for fortune telling. It was believed whoever was first to successfully bob for an apple without using their hands would be first to marry.

Scottish Girls would hold a wet sheet into front of a fire to see shadows of their future husband fall across the material. Others would peel an apple at Midnight and throw the skin over their shoulder, the better the peel represented would the first letter of the name of the person they would marry.

The word “witch’ actually comes from Wicce meaning ‘Wise Woman’ in old English. Wiccans were highly respected people and used to hold one out of their two main meetings on Halloween night.

In Medieval Europe, Owl’s were thought to be witches, and to hear an Owl’s call meant that someone was about to die.

There is a belief if a person walks backwards wearing their clothes inside out on Halloween night they will see a witch… any takers?

When they first starting filming Halloween (1978), they were on such a tight budget they used the cheapest mask they could find for Michael Myers. This happened to be a William Shatner Star Trek Mask!

We hope you learnt a few things that you didn’t already know about Halloween. Remember, you can book on to our special spooky paint night here.