Artists who dropped out of School 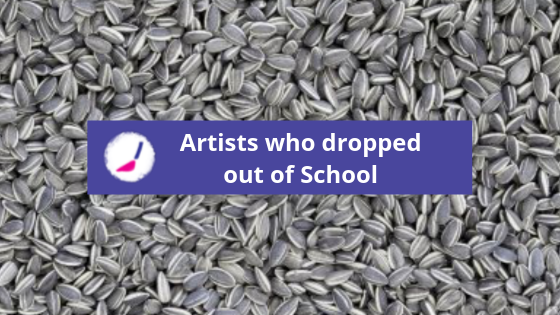 Artists who dropped out of School

As the school year begins once again, here at PopUp Painting we got reminiscing about our School days; what we learnt there, what we didn’t.. We then went on to discuss different artists who dropped out of school or university, and how this actually was a huge factor in them becoming an artist.

Pablo Picasso – dropped out of the Royal Academy of San Fernando.

At the age of 16, Picasso enrolled in Royal Academy of San Fernando but disliked the formal teaching and dropped out soon after. We guess it could be argued if Pablo Picasso had continued with traditional teaching he would have never founded the Cubism movement.

Jasper Johns – dropped out of the University of South Carolina, Parsons School of Design and Hunter College.

Jasper Johns dropped out of three educational institutions! It was in 1952 when Johns left Hunter College in New York. He then got a job working in a bookstore where he met art historian Suzi Gablik, who he then met close friend Robert Rausenburg who ended up being a huge inspiration and support network for Jasper’s art.

John Cage enrolled at Pomona College as a theology major in 1928. Two years later, Cage dropped out saying that College was no use to a writer ‘I was shocked at college to see one hundred of my classmates in the library all reading copies of the same book. Instead of doing as they did, I went into the stacks and read the first book written by an author whose name began with Z. I received the highest grade in the class. That convinced me that the institution was not being run correctly. I left’. John Cage met Marcel Duchamp at Pomona, who Cage’s first piece of art was a homage to after Duchamp’s death; Not Wanting To Say Anything About Marcel, 1969.

Ai Weiwei – dropped out of Parsons School of Art and Design.

Between 1981 – 1993 Ai Weiwei lived in the United States and enrolled in Parsons School of Art and Design. Despite meeting two artists who massively influenced his work, Warhol and Dada, Weiwei didn’t take to the school’s traditional methods and dropped out.