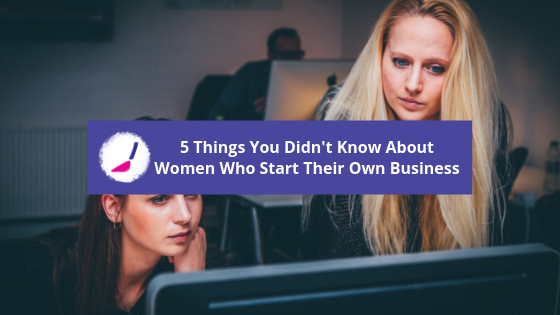 1. A fifth of British Businesses are run by women.

Yes, this number is sadly low, considering there are 1 million more females in the country than men. However, this number is on the way up. Especially with the rise of ‘mumpreneurs’. Many women after having children are finding it more beneficial to start their own business than going back to work. In 2014, 70% of newly registered self-employed businesses are started by women (Office of National Statistics, 2015)

…and this number is growing every year! This is recorded across 74 countries in the world. (Women’s Entrepreneurship 2016 -2017).

3. RBS has calculated that boosting female entrepeneurship could put £60bn extra into the UK economy.

Women are almost 5 times more likely to mention family reasons for starting their own business, whereas men are more likely to state their reason for becoming self employed is to ‘make more money’. (ONS Regional Trends, Women in Business 2009)

5. Women are far more likely to introduce a product or service that is unfamiliar to the current market

This is said to avoid competition in the industry. a great example of this is the founder of Liz Hobbs Group. Hobbs found a gap in the market with combining sporting and music events, and ht company is now one of the leading producers of events.

If you’re thinking of starting up your own business, make sure you read up on the Government’s Start Up Loan Scheme. Natwest has launched a ‘Back Her Business’ – a female only crowdfunding scheme.

The founder of PopUp Painting, is a female entrepreneur named Phyllissa Shelton, to find out more of her story, please go here.