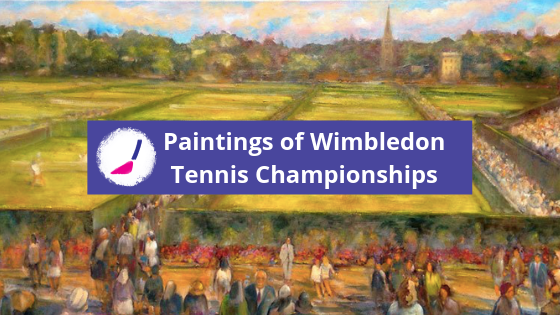 Wimbledon Tennis Championships has been gracing South West London since 1877. The first competition attracted 22 men to compete and a crowd of 200 watched. Spencer Gore won the first ever Wimbledon tournament. The 1880’s saw the competition develop with Men’s doubles and Ladies singles being introduced into the tournament. Maud Watson became the first female champion after beating her sister. Since then, the competition starts to get world-wide coverage and marks the beginning of British Summer. To celebrate we are looking at paintings of Wimbledon Tennis Championships.

Wimbledon Tennis Championships by Hall Groat, painted in 2013 summarises a classic day at the tournament. The artist has intentionally left the tennis players at a distance, portraying the way many spectators watch the sport. The fluid brushstrokes of figures in the crowds captures the excitement of watching the game.

Louise Braithwaite’s Wimbledon Tennis has a far more light-hearted feel to the painting. The figures in the painting have elongated limbs giving the impression of a less elegant nature to the sport. Braithwaite has also made humorous observations of people watching the tournament. For example having the spectators hiding in the shade of their parasols in the sun.

Yunha Palmer’s Wimbledon Centre Court focuses on the players rather than the spectators. Having the audience missing in this painting indicates the pressure for the sportsmen at match point. The crowd silenced into the background and there is no one else but themselves and their opponent.

Jonas Wood is an American artist who’s works are about disorientating space. Wood states that his Tennis court series is not about the sport but transforming the court into an abstract geometric puzzle. There are no tennis players and the crowd has become an obscure shape.

We hope our paintings of Wimbledon Tennis Championships has got you in the mood for this year’s competition, just don’t forget the Pimms! Make you read more of our PopUp Painting blogs here.