5 Things you didn’t know about Edward Hopper’s House by The Railroad, 1925 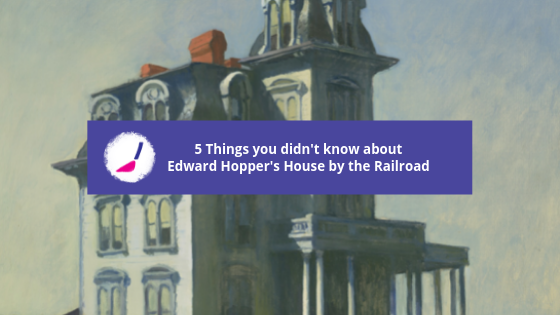 5 Things you didn’t know about Edward Hopper’s House by The Railroad, 1925

Edward Hopper (1882 – 1967) is known as one of the most important American artists of the Twentieth century. Hopper’s paintings normally carry the theme of isolation and loneliness. Edward Hopper’s House by the Railroad depicts a grand but worn Victorian house fronted by tracks of a railroad. The tracks act as a barrier making the house isolated. This potentially makes reference to communities being left behind and forgotten in America’s push towards urbanisation.

Here’s a few facts about this incredible painting.

This painting inspired the Bates’ mansion in Alfred Hitchcock’s Psycho

Hitchcock used Hopper’s painting as the basis for the Bates’ Motel. In the film, Norman Bates’ describes about the new highway directing potential customers away from his business mirrors Hopper’s symbolism of communities being left behind by development. The eerie, rundown appearance of the house was a perfect setting for one of the best horror movies of all time.

Yes, this painting inspired more films! Cartoonist, Charles Addams created this ghoulish family and gave them a home in a building that is extremely similar to the out of fashion Victorian house in Hopper’s painting in 1945.

And, it inspired the house in Beetlejuice

Tim Burton, the master of eerie comedies was bound to take inspiration from this painting. He used it as the setting for his haunted house in Beetlejuice, again the house sits alone, isolated from the rest of the world.

There’s disagreements on the inspiration for the house

Although we knew what Edward Hopper’s House by the Railroad inspired, there is conflicting views on where the inspiration for the painting came from. Some believe that this painting was of a house on Rte. 9 in Haverstraw, New York which has similar Victorian architecture and stands near a cemetery. Others claim it was done from Hopper’s imagination and inspired from buildings in New England.