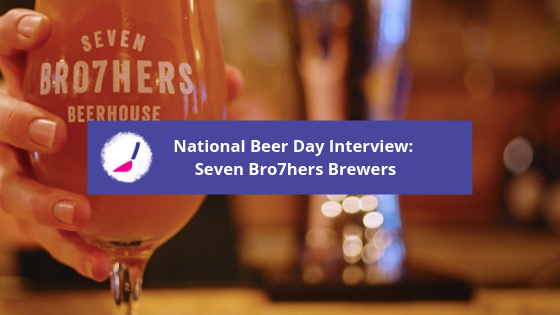 It’s National Beer Day on Saturday 15th June, and we thought we’d celebrate not only by cracking open a bottle of something chilled but by chatting to our favourite family run brewery, Seven Bro7hers.

So, for those of those who don’t already know, why are you called Seven Bro7hers?

We are called Seven Bro7hers Brewery because we are actually Seven Brothers! We were taught to brew by our late father who used to brew ginger beer in the basement. We also have four sisters that make gin, making us the single largest family in the alcohol industry, to our knowledge.

When did you get the idea to start brewing your own beer?

The idea for the boys to start brewing their own beer came from two of the brothers (Keith and Greg) going on holiday and seeing what the craft beer scene was like (one in Oslo, one in USA). We had teachers, engineers and brothers who could brew within the family. So we thought why not give it a go, and we’ve gone from strength to strength ever since.

What has been the hardest challenge starting a business?

Balancing the demands your own business requires with the demands of home and family life and the sacrifices that need to be made in order for the business to be a success.

What advice would you give to someone else wanting to start their own business?

To arm yourself with as much knowledge of the industry you are getting in to before you start and to prepare yourself mentally and physically for the first three years of the business due to the stress you will experience and having to burn the candle at both ends a lot.

And, as it’s National Beer Day, other than your own, which beer will you be cracking open tonight?

Seven Bro7hers bars are located in Manchester, make sure you go visit!