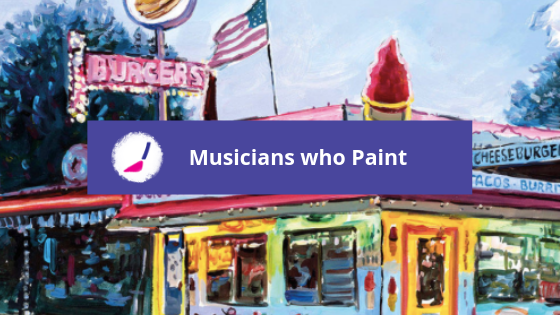 With Glastonbury kickstarting the festival season this Month, here in the PopUp Painting office we got chatting about the common link between musical and visual artists. Many members of the most iconic bands studied at Art College before pursuing a career in music (think The Bealtes, Rolling Stones, Pulp..). These are a few that kept a paint brush in one hand, guitar in the other…

Ronnie Wood is better known as a member of the iconic Rolling Stones, however having studied at Ealing College of Art, Wood is an expressive painter and artist. Ronnie would works in a range of mediums such as oil paints, charcoal, watercolours and spray paints. Ronnie Wood paints many pictures of the Rolling Stones.

David Bowie (born David Jones) studied at Bromley Technical High School before pursuing a career in music. Throughout his musical career Bowie still found time to paint, draw, photograph and make prints. These works have a range of subjects, he completed many self portraits, illustrations inspired by his music and more emotive, eerie prints like the one shown below.

Joni Mitchell is known mainly for her folk songs, but is also an incredible painter. You may recognise the emotive painting below as it was used for the cover of one of her albums, Both Sides Now. Mitchell said she painted this portrait of herself when she in her early 30s. The album was realised on Valentine’s Day 2000.

Bob Dylan is also known now for his paintings as well as folk music, he is represented by many galleries. Dylan paints mainly from life, observing people, history and portraits. Bob’s brush strokes are bold and expressive and he often uses vibrant colours.

Stevie Nicks claims she is not an artist but loves to draw. In an interview made 5 years ago, she said she’d like to spend the next few years continuing with her music then focus on her visual art. Nicks keeps her work hidden away from the world so it was hard to find an example of her work. However, we came across this portrait of Rhiannon, the white witch she sings about in the famous Fleetwood Mac song, of the same name.

Janis Joplin, the American Rock, Blues and Soul singer, who sadly died at the young age of 27, didn’t just leave behind her music, but a range of different artworks and artistic styles. These vary from cartoon sketches to life drawing to portraiture.

Frank Sinatra explored visual art mainly in the later part of his life, his creations were mainly striking abstract pieces with geometric shapes, but he also explored photography and still life.

Want to try your hand at painting? Make sure you book yourself into a PopUp Painting event! No experience needed, but you may find yourself with a new skill.