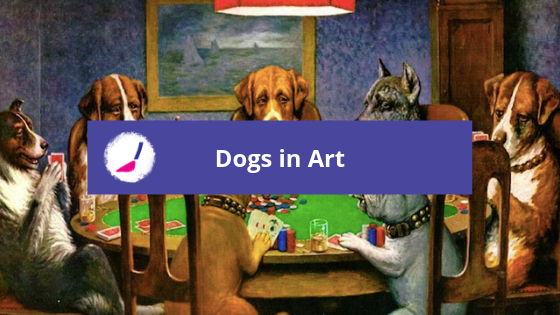 To celebrate our furry friends, we are going to give you the best of Dogs in Art!

For thousands of years artists have used art to depict a man’s best friend. So let’s start at one of the earliest findings of a visual representation of a canine. This is at the Roman House of the Tragic Poet in Pompeii, Italy which dates back to 2nd Century BCE. The house is decorated with mosaic panels, one of which depicts a dog on a leash which is named CAVE CANEM ‘Beware of the Dog’ warning anyone who entered. This has inspired the Beware of the Dog signs people often have on their house today.

In 1565 Pieter Breugel the Elder painted ‘The Hunters in the Snow’ which captures dogs working for their masters.This is one in a series of paintings by Breugel of this subject. This painting is set in the depths of winter, the other paintings in the series depicts other times in the year. Breugel’s paintings are famous for having many strong natives within his detailed scenes. Here the dogs seem to portray a negative emotion with their heads hanging down returning from an unsuccessful hunt.

We then move on to the 18th Century to Trial By Jury which is more commonly known as Laying Down The Law. Painted in 1840 by English painter Sir Edwin Landseer. The Oil Painting has different breeds of dogs portraying different roles in court with a French Poodle as the Judge. The inspiration for this painting came from a passing comment at a dinner party that a judge made about an artist, Count D’Orsay’s French Poodle saying the dog ‘would make a capital Lord Chancellor’.

In 1894, American Artist, Cassius Marcellus Coolidge started his ‘Dogs Playing Poker’ series of paintings. This began with Poker Game. Coolidge then got commissioned for 16 further paintings of the series by a cigar ad campaign in 1903, then Coolidge completed his final painting in 1910. In 2015, the first painting, Poker Game sold for $658,000 at Sothebys in New York.

An article about Dogs in Art is not complete without a mention of controversial artist Jeff Koons and his series of Balloon Dogs. These sculptures are made out of polished stainless steel and are coated in Orange, Blue, Magenta, Red or Yellow.

On 12th November, 2012 The Orange Balloon Dog made history by becoming the most expensive work sold by a living artist when it went for a whopping $58.4 Million! These sculptures have also cracked the Pop World with Jay Z rapping about them in his song Picasso Baby.

Of course, we have to give a mention to Charlie Kelly from It’s Always Sunny in Philadelphia painting of a German Shepherd, that was painted on top of a very valuable piece of art devaluing in by potentially millions. Painted in 2012 this painting was sadly later burnt.

Want to paint your own furry friend? Why don’t you come along to one of our events in he hopefully near future, where you can paint whatever you want regardless on the theme.

This Picasso inspired painting of two dogs sleeping is by one of our artists, Annie Dalton, keep an eye out for this painting in our calendar of upcoming events.