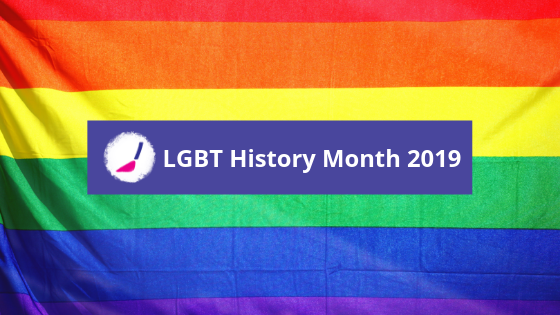 February is LGBT History Month. It’s a month dedicated to the celebration and recognition of LGBT people throughout history – a community which has often been invisible or marginalised in the mainstream.

For example: did you know that it was only in 1967 that “homosexual acts” between men were decriminalised? And that it wasn’t until 2000 that the age of consent was equalised between same sex and different sex partners. Did you know that the World Health Organisation only declassified same sex attraction as a mental illness in 1992?

Equal rights have come on along way in recent years. And at PopUp Painting we are delighted to be featuring contemporary LGBT artists throughout the month. We’re talking to them about how being LGBT features in their work, and the experiences they and their colleagues have faced in the art world and beyond.

While equal rights have advanced, we need to be mindful. Research by the likes of Stonewall show that the fight for equality is not over. As many as one in five LGBT people have experienced a hate crime or incident because of their sexual orientation and/or gender identity in the last 12 months. Nearly half (45%) of LGBT pupils report being bullied for being LGBT in Britain’s schools – with this number reaching as many as 64% for trans pupils.

Raising awareness and visibility is just one small thing we can do to help.

To learn more about LGBT history in the UK, check out this awesome timeline from Stonewall. For key facts and figures, including those referenced in this piece, see here.