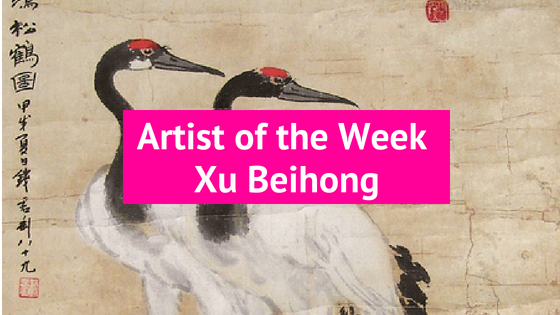 The artist was one of the first Chinese artists to articulate the need for artistic expressions that reflected a new modern China at the beginning of the 20th century.

Xu began studying classic Chinese works and calligraphy with his father when he was six.

The artist then moved to Shanghai where he made a living off commercial and private work. He traveled to Tokyo in 1917 to study art, upon his return to China he began to teach at Peking University’s School of Art. In 1919, Xu studied overseas in Paris at the ‘École Nationale Supérieure des Beaux-Arts’, where he studied oil painting and drawing.

His travels around Western Europe allowed him to observe and imitate Western art techniques.

He came back to China in 1927 and, from 1927 to 1929, gained a number of posts at institutions in China, including teaching at National Central University.

In 1933, Xu organised an exhibition of modern Chinese painting that traveled to France, Germany, Belgium, Italy and the Soviet Union.

Xu enjoyed massive support from art collectors across Asia and between 1939 and 1941, he held solo exhibitions in Singapore, India and Malaysia to help raise funds for the war relief effort in China.

After the founding of the People’s Republic of China in 1949, Xu became president of the Central Academy of Fine Arts and chairman of the Chinese Artists’ Association.

Xu is probably the one most responsible for the direction taken in the modern Chinese Art world.

Xu Beihong was a master of both Chinese ink and oil. Most of his works, however, were in the Chinese traditional style.

In his efforts to create a new form of national art, he combined Chinese brush and ink techniques with Western perspective and methods of composition. He integrated firm and bold brush strokes with the precise delineation of form.

As an art teacher, he advocated the subordination of technique to artistic conception and emphasises the importance of the artist’s experiences in life.

Xu died in 1953. After his death, a Xu Beihong Museum was established at his house in Beijing.

We will be featuring Xu Beihong’s work all week on our Facebook and Twitter pages, but in the meantime here are some of our favourite works by the artist: