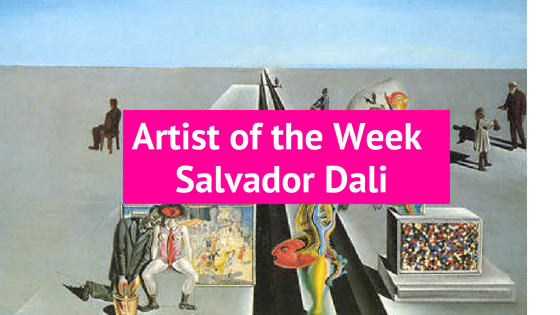 The artist was born in 1904 in Figueres, Spain.

Salvador Dali was one of the leading members of the Surrealist movement.

The Surrealists were known for a desire to express the contents of the unconscious mind through their work. They believed that artistic and political freedom enabled a free imagination.

Although Dali’s works depicted bizarre and often distorted imagery, the artist was nonetheless known as a skilled draftsman.

Dali was initially influenced by the great Masters of the Renaissance period, but soon adopted his famous Surrealist style after meeting artists such as Magritte and Miro in Paris in the 1920’s.

Many of the artist’s works contrast sharply drawn objects in strange contrast to one another, usually contained in a landscape that tilts oddly upwards.

Salvador Dali’s best known work is ‘The ‘Persistence of Memory’, where he depicts a dreamlike landscape of soft ‘melting’ clocks.

Dali was not limited to one medium and his expansive practice included film, sculpture,photography and performance.

In the 1930’s Dali was ‘expelled’ from the Surrealist movement after a difference of political views from his peers.

It is also rumoured that the artist fell out of favour with his peers because of his exaggerated view of himself and celebrity-like status. The artist’s career shifted from the Surrealist style to a practice that was preoccupied with science and religion until his death in 1989.

We will be featuring Salvador Dali’s work all week on our Facebook and Twitter pages, but in the meantime here is a selection of our favourite works by the artist…