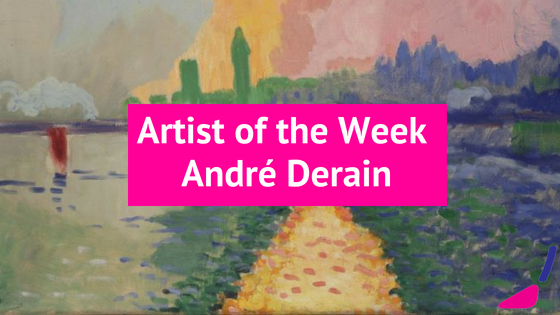 PopUp Painting’s ‘artist of the week’ is Andre Derain.

Andre Derain (1880-1954) was a French painter, printmaker and sculptor famed as one of the creators of Fauvism and one of the first to ‘discover’ primitive art.

Derain and his contemporary Henre Matisse became known for their vivid paintings, characterised by bold brush strokes and the use of unnatural colours. The critic Louis Vauxcelles dubbed the artists as ‘les Fauves’, or ‘the wild beasts’, marking the start of the Fauvist movement. In March 1906, the noted art dealer Ambroise Vollard sent Derain to London to produce a series of paintings with the city as subject. In 30 paintings Derain presented a portrait of London that was radically different from anything done by previous painters of the city such as Whistler or Monet. With bold colours and compositions, Derain painted multiple pictures of the Thames and Tower Bridge. These London paintings remain among his most popular work.

Towards 1911 Derain’s work began to shift from the brilliant Fauvist palette to more muted tones, showing the influence of Cubism and Paul Cézanne.

However, by 1914 the artist once again shifted his work and moved away from his pre-war experimentation to a much more conservative style reflecting his admiration for the Old Masters.

In 1914 he was mobilised for military service in World War I and after the war Derain won new acclaim as a leader of the renewed classicism.

With the wildness of his Fauve years far behind, he was admired as an upholder of tradition. The works he painted in this classic manner (including landscapes, portraits, still life and nudes) made him wealthy and internationally famous but they dismayed many supporters of avant-garde art.

Even  after Derain’s death fans are still polarised about which body of work was his greatest.

We will be featuring Andre Derain’s work all week on our Facebook and Twitter pages, but in the meantime here is a selection of our favourite works by the artist: