To celebrate Pride 2018 PopUp Painting are looking at the history of LGBT art and some of the most influential artists from the movement.

From Ancient Greece to the present day LGBT art has existed. It has been a tumultuous road for LGBT artists who have faced enduring issues such as censorship, discrimination and persecution while creating their art. LGBT art history has existed in conflicted state of having the need to conceal references to LGBT identity but also a strong and urgent desire for visibility. The canon of western art history has been shaped by the exclusion of LGBT art and although in recent years things have improved for LGBT artists, there is still some way to go.

An early example of an LGBT artist is the pre-Raphaelite painter Simeon Solomon. The artist was educated at the Royal Academy Schools in London in the 1850’s . Solomon was known for his depictions of same sex desires, often taking the form of androgynous, chastely lounging angels and deities. The artist was often denounced for his use of ‘obscene’ imagery, but it was’t until 1873 when the artist was arrested for attempting to commit sodomy that his career was cut short. After his prosecution Solomon no longer exhibited his work, but achieved a degree of celebrity amongst those who shared his sensibilities; one of his biggest fans was Oscar Wilde.

Sappho and Erinna in a Garden at Mytilene, Simeon Solomon, 1864

In the 1930’s the French Surrealist photographer Claude Cahun became a prominent but controversial artist whose work focused on gender refusal. Cahun was best known for her self-portraits, in which she assumed a variety of personas. Her work was both political and personal, and often undermined traditional concepts of static gender roles. She once explained: “Under this mask, another mask; I will never finish removing all these faces.” In 1944  the artist was arrested and sentenced to death for working as a resistance worker and propagandist against Nazi Germany. 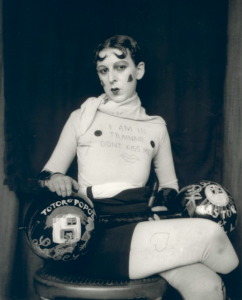 The 1960’s saw welcome changes in both attitude and law to the LGBT community.

In 1967 male homosexuality in England and Wales was partially decriminalised and in the US the Stonewall Riots saw a huge momentum in LGBT activism. These shifts influenced the art that was being made, artists became emboldened to make art about their sexual identity, and LGBT art historians began to recuperate the work of LGBT art that went unnoticed, had been censored, or written out of history books. For the first time LGBT artists like David Hockney, Andy Warhol and Francis Bacon became prominent players in ‘mainstream’ art, dominating shows at large institutions and paving the way for a new generation of artists.

By the 1980’s LGBT art had another major moment when LGBT artists began to highlight and campaign for awareness of the AIDS epidemic.

One the the main artists involved in this activism was Keith Haring. Haring was known for his stylised drawings on empty black advertising panels in the New York subway. After being diagnosed with AIDS in 1988, Haring established the ‘Keith Haring Foundation’ to raise money and provide art to AIDS organisations and the artist dedicated the rest of his life and art to raising awareness for the cause. 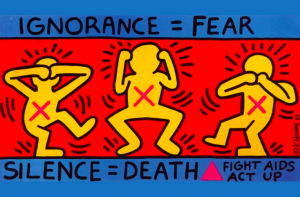 LGBT art is now thankfully an integral part of contemporary art. Artists like Prem Sahib, Wolfgang Tillmans and Rachael House are artists who make work about LGBT themes and are some of the most successful young artists of our time. Last year Tate Modern held a hugely popular exhibition of Queer Art and Frieze art fair had a daily performance about Queer activism which attracted huge audiences. And though large institutions have become more inclusive there is still some way to go to compensate for the years of exclusion that LGBT art endured.

This large-scale sculpture is based on the footprint of a typical new-build, one-bedroom apartment, referencing the changing landscape of the local area. The modular maze-like structure is inspired by the historical attractions of the nearby Vauxhall Pleasure Gardens (operational from 1732–1859) whose pavilions and walkways were transformed into notoriously transgressive spaces after dark. Sahib also alludes to contemporary gay nightlife, particularly Vauxhall’s well-known club scene. Throughout the day and night, the installation will reflect on the current character of the local area. The location of the work in a public park within a historic and rapidly changing residential neighbourhood provides an opportunity to reflect on notions of safety, surveillance, housing and home.