PopUp Painting’s artist of the week is Andy Warhol. 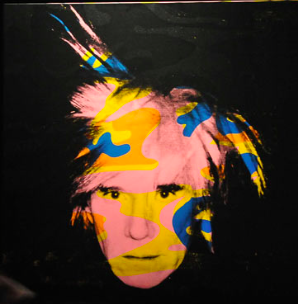 Andy Warhol (originally known as Andy Warhola) was an American artist who was a leading figure in the ‘Pop Art’ movement. His works explore the relationship between artistic expression, celebrity culture, and consumer cu
lture. Warhol used many types of media, including drawing, painting, printmaking, photography, silk screening, sculpture, film, and music to make his art.

In 1961, the artist debuted the concept of “Pop Art”—by creating paintings that focused on mass-produced commercial goods. Soon after exploring the notion of ‘Pop Art’ Warhol exhibited the now-iconic paintings of ‘Campbell’s Soup Cans’. These small canvas works of everyday consumer products created a major stir in the art world, bringing both Warhol and pop art into the national spotlight for the first time.

Warhol’s other famous pop paintings depicted Coca-cola bottles, vacuum cleaners and hamburgers. He also painted celebrity portraits in vivid and garish colors; his most famous subjects include Marilyn Monroe, Elizabeth Taylor, Mick Jagger and Mao Redoing. As these portraits gained fame and notoriety, Warhol began to receive hundreds of commissions for portraits from socialites and celebrities. His portrait “Eight Elvises” eventually resold for $100 million in 2008, making it one of the most valuable paintings in world history.

In 1964, Warhol opened his own art studio, a large silver-painted warehouse in Manhattan known simply as “The Factory.” The Factory quickly became one of New York City’s premier cultural hotspots, a scene of lavish parties attended by the city’s wealthiest socialites and celebrities, including musician Lou Reed, who paid tribute to the hustlers and transvestites he’d met at The Factory with his hit song “Walk on the Wild Side”.

In 1968 Warhol’s thriving career almost ended when he was shot by Valerie Solanis (an aspiring writer and radical feminist) on June 3. Warhol was seriously wounded in this attack and spent weeks recovering from his injuries.

In the 1970s, Warhol continued to explore other forms of media. He published the books ‘The Philosophy of Andy Warhol (From A to B and Back Again)’ and ‘Exposures’. Warhol also experimented extensively with video art, producing more than 60 films during his career. The influential figure also coined the widely used expression ’15 minutes of fame’.

Andy Warhol died in 1987 at the age of 58. The artist made an indelible mark on contemporary art and culture alike.

We will be featuring Andy Warhol’s work all week on our Facebook and Twitter pages, but in the meantime here are some of our favourite works by the artist: