Frida Kahlo de Rivera is seen as one of the most influential artists of the twentieth century.

Perhaps best known for her self-portraits, Kahlo’s work is remembered for its “pain and passion” and its intense vibrant colors. Her work has been celebrated in Mexico as emblematic of national and indigenous tradition, and by feminists for its uncompromising depiction of the female experience and form. 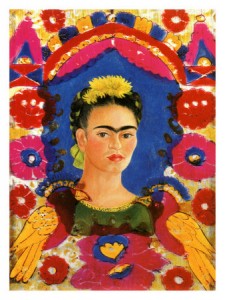 Mexican and Amerindian cultural tradition figure prominently in her work, which has sometimes been characterized as Naïve art or folk art.  Her work has also been described as “surrealist”, and in 1938 one surrealist described Kahlo herself as a “ribbon around a bomb”. Other influences of the artists work include ancient Aztec belief, popular Mexican folklore, Eastern philosophy and medical imagery.

Kahlo suffered lifelong health problems, many of which stemmed from a traffic accident in her teenage years. These issues are reflected in her works, more than half of which are self-portraits of one sort or another. Kahlo suggested, “I paint myself because I am so often alone and because I am the subject I know best.”  Kahlo began painting because of her convalescence.

We will be featuring Frido Kahlo’s work all week on Facebook and Twitter so keep an eye out for more on the artist, but in the meantime here are some of our favourite works by the artist: