5 Irish Artists You Need to Know 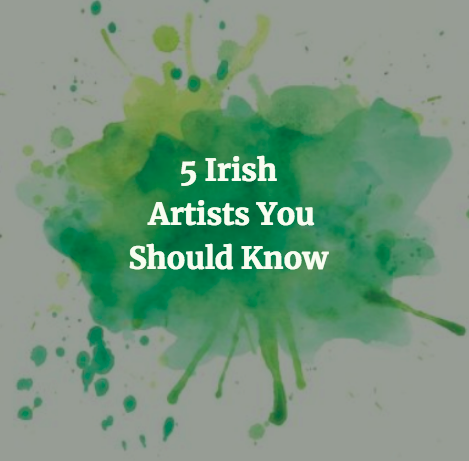 5 Irish Artists You Need to Know

For the weekend that’s in it PopUp Painting have picked five of our favourite Irish artists that we think you’ll agree are pretty wonderful! 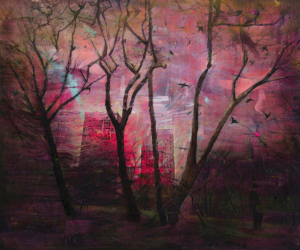 Elizabeth Magill was born in 1959 in Ontario, Canada, of Irish descent, she grew up in Northern Ireland and studied at the Belfast College of Art before moving to London to study at the Slade School of Art, in which city she now resides.

She began exhibiting in the 1980’s, gaining her first major solo exhibition at the Arnolfini Gallery, Bristol in 1990. In the same year she was included in the seminal British Art Show, which first introduced many of the most prominent younger British artists to a wider public.

Magic often starts her paintings with a photographic image on the canvas, which she proceeds to work on, applying and scraping away layers of paint, until she achieves the mood in the painting which she is seeking. The landscapes the artist creates are often bare, desolate and even forbidding and are less about representing real views as about reflecting her emotional response to the experience of the encounter. You can check out Elizabeth Magill’s work which is currently exhibiting at Matt’s Gallery in Bermondsey, London. 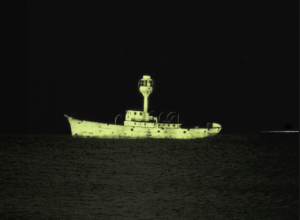 Dorothy Cross works in sculpture, film and photography and examines the relationship between living beings and the natural world. Living in Connemara  a rural area on Ireland’s wild west coast, the artist sees the body and nature as sites of constant change, creation and destruction, new and old. This flux emerges as strange and unexpected encounters. Many of Cross’ works incorporate items found on the shore, including boats and animal skins, while others reflect on the environment. During the 90s, the artist produced a series of works using cow udders, which drew on the animals’ rich store of symbolic associations across cultures to investigate the construction of sexuality and subjectivity. She has worked on several large-scale public projects, most memorably the award-winning Ghost Ship, where the artist projected light on to a ship moored in the sea in a hauntingly beautiful work. In recent years, her practice has focused on nature and the ocean, working with maligned animals such as jellyfish and shark, and exploring rarely accessible areas like sea caves or shell grottos. 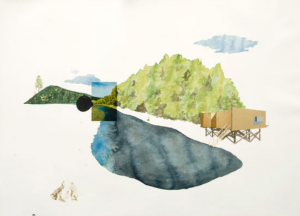 Blaise Drummond was born in Liverpool in 1967, but has lived and worked in Ireland for many years. His influences include 1960s American land art, punk rock, the characteristic architecture of Le Corbusier and Alvar Alto and the landscape paintings of Caspar David Friedrich. These sources of inspiration may at first glance seem widely disparate, but all are concerned with contradictions between nature and culture, the civilised versus the uncontrollable. Drummond’s paintings are meticulously created, each mark has been carefully planned and constructed. His canvases combine minimal but representational depictions of architectural and natural images with found materials which are often integrated into the actual canvas or sometimes into a wider installation with the work. 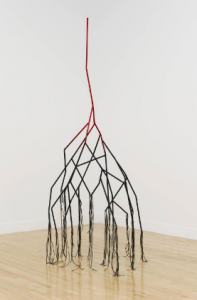 Eva Rothschild was born in 1972 in Dublin, Ireland. Her work references the art movements of the 1960s and 1970s, such as Minimalism. She has used materials such as Plexiglas, leather and paper in her sculptural pieces. The artist’s sculptures have an anthropomorphic quality, often leaning, stretching and balancing in the gallery space. 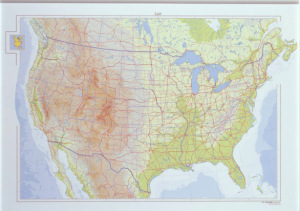 Kathy Prendergast is an Irish sculptor whose work has persistently revolved around a cluster of issues, chief among which are sexuality, identity, landscape, mapping and power. Over the past decade, her work has incorporated maps modified in various ways to take on emotional and personal resonances. Though non-didactic, Prendergast’s cartographic interventions also depict shifting power structures, subtly dismantling the narratives of imperialism and colonialism, and revealing the fragility of political gestures through acts of erasure and transformation. Though enigmatic and eerily beautiful, Prendergast’s works are often marked by a sense of misdirection or loss.