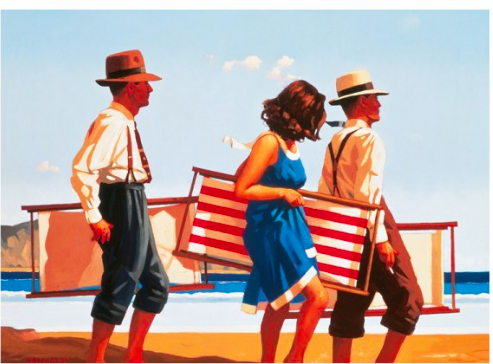 PopUp Painting’s artist of the week is Jack Vettriano.

Jack Vettriano was born in Fife, Scotland in 1951. Vettriano is a self taught painter having previously had a career in engineering. Vettriano first found fame in 1989 when two of his canvases submitted to the Royal Scottish Academy sold on the first day.

Vettriano’s most famous work ‘The Singing Butler’ was sold at Sotheby’s for close to £750,000.

The image of this painting is now one of Britain’s best selling posters and postcards. The artist was awarded an OBE for Services to the Visual Arts and was the subject of a South Bank Show documentary, entitled ‘Jack Vettriano: The People’s Painter‘.

‘I have what I want and that is the support of the public and that means far more to me than the approval of a bunch of well-educated art buffs.’

PopUp Painting has a simple aim: to bring art out of the classroom and the gallery and into the places where people meet on an everyday basis. Bringing social painting to London, we pop up in bars and restaurants right across London, Surrey and St. Albans. With public events, corporate events and private parties, and with themes from Banksy to Van Gogh, our events require no experience and give people a chance to have fun unleashing their creativity. Wine glass in one hand, paint brush in the other. Our painting and wine nights are one of the most creative things to do in London!