Artist of the Week: David Mach 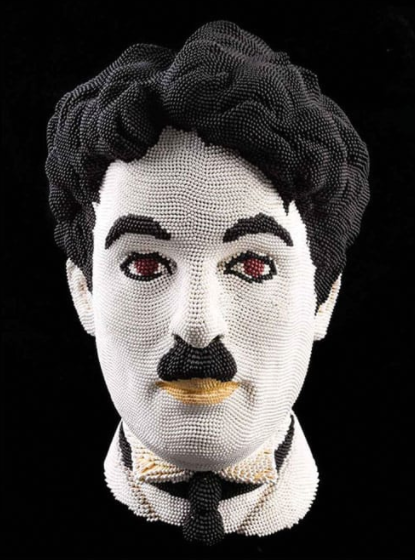 Artist of the Week: David Mach

PopUp Painting’s ‘artist of the week’ is David Mach.

David Mach is a Scottish sculpture and installation artist who is best known for his intricate sculptures that use large quantities of mass-produced products ranging from coat hangers to match sticks. Many of Mach’s installations are temporary and constructed in public spaces.

David Mach studied at Duncan of Jordanstone College of Art and Design, Dundee, Scotland and tlater at the Royal College of Art, London between 1979 – 82. An early influential sculpture by the artist  ‘Polaris’ was exhibited outside the Royal Festival Hall, South Bank Centre, London in 1983. The work consisted of some 6000 car tyres arranged as a lifesize replica of a Polaris submarine. Mach intended it as a protest against the nuclear arms race. In the early 1980s Mach started to produce some smaller-scale works assembled out of unstruck match sticks. These mostly took the form of human or animalistic heads and masks, with the coloured tips of the match heads arranged to construct the patterned surface of the face. After accidentally setting fire to one of these heads, Mach now often ignites his match pieces as a form of performance art.

Recently Mach has produced some permanent public works such as ‘Out of Order’ in Kingston- upon-Thames and the ‘Big Heids’ visible from the M8 between Glasgow and Edinburgh.

Mach was nominated for the Turner Prize in 1988 and in 2000 he joined the Royal Academy of Arts as Professor of Sculpture.

We will be featuring David Mach’s work all week on our Facebook and Twitter pages all week, but in the meantime here is a selection of our favourite works by the artist: