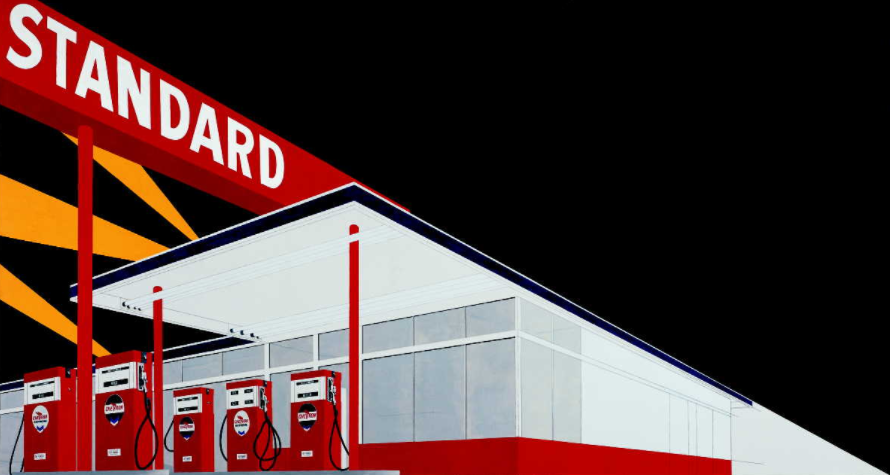 PopUp Painting’s ‘artist of the week’ is Ed Ruscha.

Ed Ruscha is an American artist who was one of the first ‘Pop Art’ artists of the 1960’s and whose work captured American culture in a succinct and dead pan manner.

Ruscha’s career began in the early 1960’s when the artist broke away from the painterly conventions of Abstract Expressionism and rendered the word “OOF” in big, block yellow letters on a blue backdrop. The painting—a graphic composition, borrowed from the era’s advertising aesthetics—was the epitome of Pop Art, a movement which Ruscha would go on to pioneer, along with Warhol, his East Coast foil. The painting now hangs permanently on MoMA’s walls as a testament to Ruscha’s unique, gut-punching ability to pack cultural commentary into a single word.

In the 1970s, Ruscha began using entire phrases in his works, thereby making it a distinctive characteristic of the post-Pop Art generation. During the mid-1970s, he made a series of drawings in pastel using pithy phrases against a field of colour and in the early 1980s he produced a series of paintings of words over sunsets, night skies and wheat fields. Ruscha also started using an all-caps typeface of his own invention named ”Boy Scout Utility Modern” in which curved letter forms are squared-off (as in the Hollywood Sign). Beginning in the mid-1980s, in many of his paintings black or white ‘blanks’ or ‘censor strips’ are included, to suggest where the ‘missing’ words would have been placed. The ‘blanks’ would also feature in his series of silhouette, cityscapes or ‘censored’ word works, often made in bleach on canvas, rayon or linen.

Throughout his career Ruscha has represented the U.S at the Venice Biennale and in recent years has had international retrospectives of his work, including at the Hayward Gallery, London.

We will be featuring Ed Ruscha as our ‘artist of the week’ on our Facebook and Twitter pages, but in the meantime here is a selection of our favourite works by the artist: