Artist of the Week: Janet Wallace 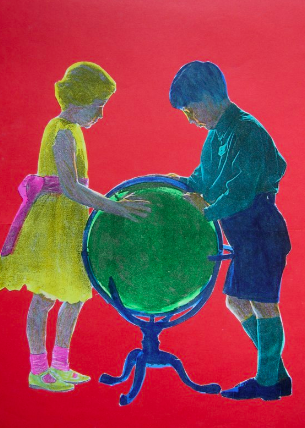 Artist of the Week: Janet Wallace

PopUp Painting’s ‘artist of the week’ is Janet Wallace.

Janet Wallace is a Canadian artist who works across a range of media which includes paint, drawing and printmaking. The artist studied a BFA at NSCAD in Halifax, Canada.

The artist started her career designing t-shirts, hand silk-screening them and selling them in stores in NYC, LA and Vancouver. After her studies the artist worked across a variety of subjects, but most often with a focus on figurative works. for the past decade Janet Wallace has focused her practice on creating large scale murals. The artist has worked with many community groups and is particularly interested in projects that focus on benefiting communities.

Wallace has also spent the past months setting up a project ‘Covering the news’. The project aims to be an anecdote to all the ‘bad news’ in recent times. The artist notes;

‘As a small antidote, I started posting on FaceBook some of my art pieces celebrating the values that I believe in. This elicited positive responses from people who appreciated the change of tone. I also created some signs for the Women’s March which were well received.

These actions morphed into my starting a series of works on canvas. They were inspired and influenced by mixed media pieces I had done some time ago related to issues such as protection of the environment, social justice, activism, equal rights, and women’s rights. These pieces included collage, acrylic, oil pastel, and marker on paper.

This series is called “Covering The News” and is an effort to change the dialogue. I literally take media articles and copies of Trump’s tweets and cover them, putting a more positive face on top of the issues and the comments of the day. Covering the news…creating change…encouraging peace.’

Janet Wallace is currently exhibiting work to raise money for the American Civil Liberties Union. check out more at https://www.instagram.com/aclu_socal/?hl=en and http://www.janetwallace-art.com/About_The_Artist.html

We will be featuring Jane Wallace’s work all week, but in the meantime here is a selection of our favourite works by the artist: