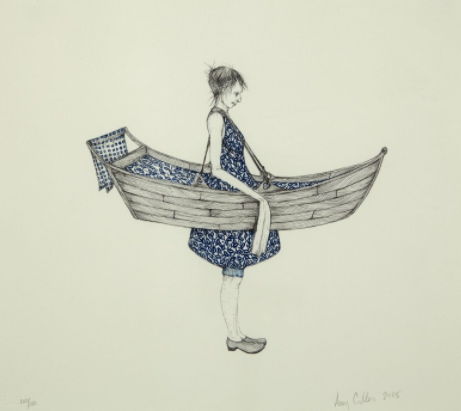 PopUp Painting’s artist of the week is Amy Cutler.

Amy Cutler (b.1974) is an illustrator from New York. The artist received her BFA degree from The Cooper Union School of Art, New York. Cutler is represented by the Leslie Tonkonow Gallery and

her work has been featured in major surveys of contemporary art, most notably the 2004 Whitney Biennial.

Cutler’s drawings, paintings and prints often focus on groups of women, dressed in Victorian style clothing, doing stereotypical “women’s work”. Using this, she creates strange narratives that play off of known fairy tales and archetypes. Her female characters are frequently paired in scenes with household items, wild animals and hybrid creatures. Despite her figures’ childlike appearances they exhibit darker themes such as poverty, social injustice and violence.

Cutler’s style is characterised by intricate and linear figurative drawings, her figures are often depicted with elongated noses, teapot heads, and broomstick arms. Cutler’s painting work features negative space frequently around her characters, showing her desire to “…get rid of the background”, which she credits for her choice to switch from painting on wood to primarily painting with gouache on paper.

We will be featuring Amy Cutler’s work all week on our Facebook and Twitter pages, but in the meantime here is a selection of our favourite works by the artist: