Artist of the Week: C.M. Coolidge 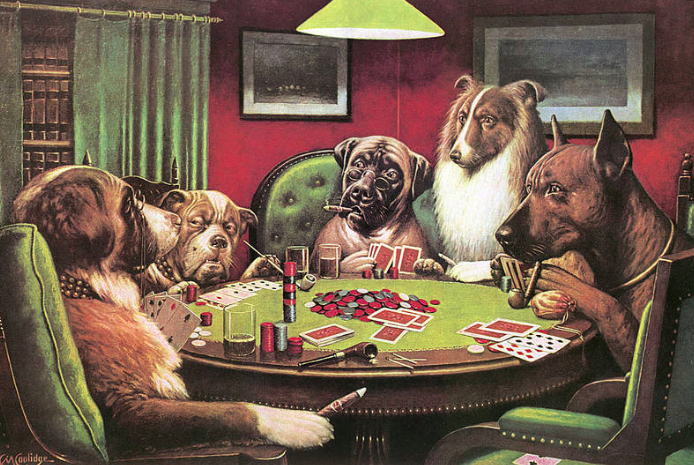 Artist of the Week: C.M. Coolidge

PopUp Painting’s ‘artist of the week’ is C.M. Coolidge.

Cassius Marcellus Coolidge(1844 –1934) was an American artist known for creating the iconic series of paintings ‘Dogs Playing Poker’ .The artist was known as “Cash” or Kash to his family and he often signed his work as Kash Koolidge.

Before becoming an artist Coolidge had many careers which included being a pharmacist, a sign painter and the founder of a bank. The artist is credited as being the first creator of ‘comic foregrounds’; the typical carnival attraction where tourists can stick their heads on to a cartoon figure as a photo op. While working for an advertising company, Coolidge began creating his first paintings of dogs in human situations. These were intended to be decorations for cigar boxes but as they gained popularity the artist continued to make them into a series of ‘dog’ paintings. The works began to sell as posters, calendars and appeared on many commercial products. The mass production of these images meant that the paintings became iconic and a prominent feature of working class households. The paintings were regarded as ‘kitsch’ or lowbrow art and did not receive critical praise in the ‘fine art’ world, being criticised for their crude draughtsmanship as well as their lacking content. Although the works were seen as ‘low value’, in 1998 a Coolidge original sold for $74,000 at Sotheby’s and in 2005 two other paintings fetched a combined price of $590,400.

We will be featuring C.M Coolidge’s work all week on our Facebook and Twitter pages, but in the meantime here is a selection of our favourite pooches….eh….we mean paintings, by the artist!