Artist of the Week: Steve Powers 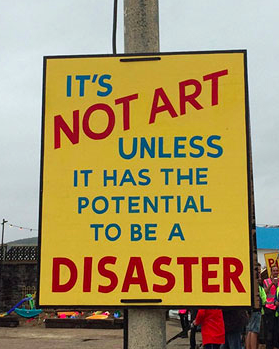 Artist of the Week: Steve Powers

Pop Up Painting’s ‘artist of the week’ is Steve Powers.

Steve Powers (b.1968) is a graffiti writer from New York, who is also goes under the pseudonym ESPO (‘Exterior Surface Painting Outreach’),

The artist is known for his witty proclamations of love created on street walls using a traditional sign-writing technique. The artist uses bold font and colours in his work. Powers has been known to paint in the risky hours of daylight, telling passerbys that he was with ‘Exterior Surface Painting Outreach’ to make himself sound official and avoid getting reported to the police. In December 1999, however, Powers was arrested for graffiti vandalism after he had participated in a protest against Mayor Rudolph Giuliani’s attempt to shut down the controversial art show ‘Sensation’ at the Brooklyn Museum.

Shortly after, in 2000 Powers gave up graffiti to become a full-time studio artist and moving his work into the Fine Art context.

His work has been shown at the Venice and Liverpool Biennials. In 2005 he curated “The Dreamland Artists Club”, a project in which professional artists helped Coney Island merchants by repainting their signs. In 2007 Powers received a Fulbright Scholarship where he travelled to Belfast to create murals with the assistance of local teenagers of the Shankhill area. The mural’s created had no political content and aimed to keep the strong tradition of murals in the area without messages of sectarianism being depicted.

In 2015 Steve Powers had a solo exhibition at the Brooklyn Museum.

We will be featuring the work of Steve Powers all week on our Facebook and Twitter pages, but in the meantime here is selection of our favourite works by the artist: