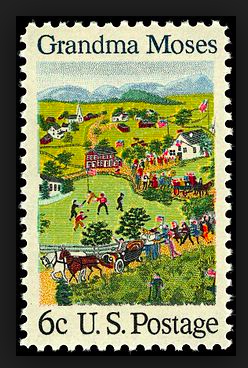 PopUp Painting’s ‘artist of the week’ is Grandma Moses.

The artist started her career at the age of 78 having spent her life working on the family farm and giving birth to ten children (five of whom passed away at early ages). Granda Moses had worked extensively in embroidery but when arthritis rendered her unable to continue with needle work she turned her creativity towards painting.

Grandma Moses initially worked with whatever materials were at hand, using leftover household paint on fireboard to create her first paintings. The artist depicted scenes of modest American country living, from landscapes of her community to scenes from country fetes. She deliberately omitted telephone poles, tractors and other signs of industrailisation.

Moses’ style was a primitive one, her worked lacked perspective and proportion, giving the work a naive quality. However as Moses’ career advanced she began to create more complicated, panoramic compositions.

In 1938 Grandma Moses’ career took off when Loius J. Caldor, a famous art collector, spotted her paintings in the window of a drugstore near her hometown and bought ten of them at 3-5 dollars each.  The following year three of Grandma Moses’ paintings were included in New York’s MOMA exhibition ‘Contemporary Unknown American Painters’. Grandmas moses continued her carreer producing over 1,500 canvases in three decades until her death in 1961.

We will be featuring Grandma Moses work all week on our Facebook and Twitter pages, but in the meantime here is a selection of our favourite works by the artist: