Artist of the Week: Cai Guo-Qiang 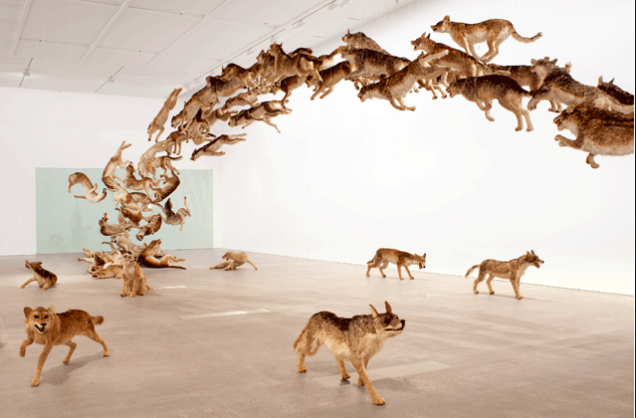 Artist of the Week: Cai Guo-Qiang

PopUp Painting’s ‘artist of the week’ is Cai Guo-Qiang.

Cai Guo-Qiang (b. 1957) is a Chinese conceptual artist whose works crosses over multiple mediums including drawing, video, installation and performance art.

Cai Guo-Qiang trained in stage design at the Shanghai Theater Academy, but later made a move towards contemporary art. It may come as no surprise that Guo-Qiang’s career started in stage design, given the magnitude and ambition of the artist’s work.

The artist is particularly well known for his work with gunpowder, initially using it in drawings and later creating his famous ‘explosion’ events. These works may have been prompted by Cai’s first-hand experiences of the Cultural Revolution, where explosions were common, whether a result of cannon blasts or celebratory fireworks.

In terms of content Cai Guo-Qiang’s practice draws on a wide variety of Chinese symbols, traditions and materials such as fengshui, Chinese medicine, shanshui paintings, science and flora and fauna. Much of his work looks at socialist concepts and have been strongly influenced by Mao Zedong. The artist himself has commented: “In some sense, Mao Zedong influenced all artists from our generation with his utopian romance and sentiment.”

Cai Guo-Qiang represented China at the Venice Biennale in 1999 and curated the Chinese pavilion there in 2005. He also held the distinguished position as Director of Visual and Special Effects for the opening and closing ceremonies of the 2008 Summer Olympics in Beijing.

Cai’s work was featured in the 2016 Netflix documentary Sky Ladder: The Art of Cai Guo-Qiang, highlighting his work with fireworks, particularly his 1,650-foot ladder of gunpowder.

He currently lives and works in New York.

We will be featuring Cai Guo-Qiang’s work all week on our Facebook and Twitter pages, but in the meantime here is a selection of our favourite works by the artist: