Art Deco is an art movement involving a mix of modern decorative art styles, largely of the 1920s and 1930s, whose main characteristics were inspired by various avant-garde painting styles of the early twentieth century.

With the rise in status of decorative artists, who in the 19th century had been considered simply as artisans. The term “arts décoratifs” had been invented in 1875, giving the designers of furniture, textiles, and other decoration official status. The Société des artistes décorateurs (Socety of decorative artists), was founded in 1901, and decorative artists were given the same rights of authorship as painters and sculptors. In 1911 the SAD proposed the holding of a major new international exposition of decorative arts in 1912. No copies of old styles were to be permitted; only modern works. The exhibit was postponed until 1914, then, because of the war, postponed until 1925, when it gave its name to the whole family of styles known as Déco. Art Deco works exhibit aspects of Cubism, Russian Constructivism and Italian Futurism consisting of abstraction, distortion, and simplification, particularly geometric shapes and highly intense colours. This for it’s time was in celebration of the rise in technology, and speed.

There was no section set aside for painting at the 1925 Exposition. Art Deco painting was by definition decorative, designed to decorate a room or work of architecture, so few painters worked exclusively in the style. 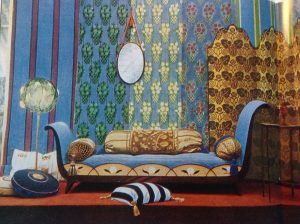 The Art Deco style appeared early in the graphic arts, in the years just before World War I. In the 1920’s, the look changed; the fashions stressed were more casual, sportive and daring, with the woman models usually smoking cigarettes. American fashion magazines such as Vogue, Vanity Fair and Harper’s Bazaar quickly picked up the new style and popularised it in the United States. It also influenced the work of American book illustrators such as Rockwell Kent. In Germany, the most famous poster artist of the period was Ludwig Hohlwein, who created colourful and dramatic posters for music festivals, beers, and, late in his career, for the Nazi Party. 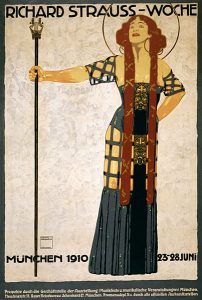 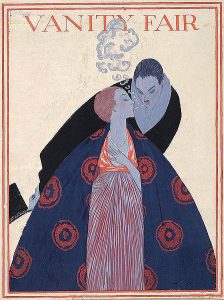 Art Deco was and is popularly considered to be an elegant style of cool sophistication in architecture and applied arts which range from luxurious objects made from exotic material to the mass produced.