Artist of the Week: Keith Haring 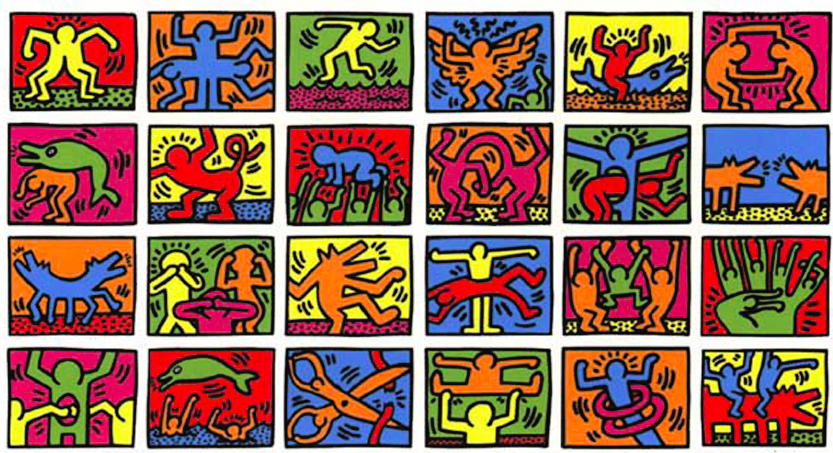 Artist of the Week: Keith Haring

PopUp Painting’s ‘artist of the week’ is Keith Haring.

Keith Haring (b. 1958) is an American artist and social activist, whose work responded to New York City street culture. The artist was known for his bold lines, vivid colors, and active figures that carried strong messages of life and unity.
Haring’s career started out by the artist drawing in chalk onto the unused advertising panels of the NYC subway. The artist worked so frequently and with such vigor that his distinctive rhythmic line drawings became a recognisable symbol of the daily subway commute. Soon Haring achieved international acclaim and was held in the same regard as his contemporaries and friends, Andy Warhol and Jean Michel-Basquiat. In 1986, Haring opened the ‘Pop Shop’, a retail store in Soho selling T-shirts, toys, posters, buttons and magnets bearing his images. Haring considered the shop to be an extension of his art practice and the shop was intended to allow people greater access to his work, which was readily available at a low cost.

By the arrival of his ‘Pop Shop’ Haring’s work began reflecting more socio-political themes, such as AIDS awareness and the crack cocaine epidemic. Haring was diagnosed with AIDS himself in 1988 and established the Keith Haring Foundation to provide funding and imagery to AIDS organizations. Keith Haring died in 1990.

We will be featuring Keith Haring’s work all week on our Facebook and Twitter pages, but in the meantime here is a selection of our favourite works by the artist: