Artist of the week: Noir 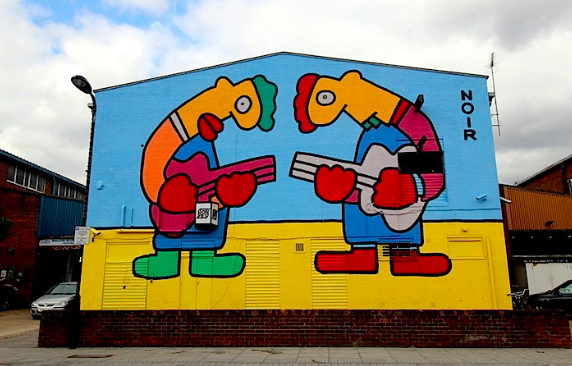 Artist of the week: Noir

PopUp Painting’s ‘artist of the week’ is Thierry Noir.

Thierry Noir (b.1958), or ‘Noir’ as the artist is often known, is a French street artist based in Berlin.

The artist has a distinctive style, using bold, stylised lines filled with bright colours to depict cartoon-like profiles. This strong emphasis on line aims to simplify forms to their most basic elements, which not only gives Noir his famous style, but also aids in the artist making his work quickly in environments that can often be hazardous.

One such a hazardous environment was the Berlin Wall, which in 1984 the artist set about painting almost 1km of. Noir was credited as the first artist to apply paint to the wall, with the objective of transforming the wall, to make it ridiculous, and to help destroy it, prempting its ultimate fall in 1989.

Noir is thought of as a forerunner of the modern street art movement and has been compared with the New York pop artist Keith Haring. Noir started working alongside London street artists in 2013 and since then his work has been popping up across London. Noir’s work was used for the cover of U2’s album ‘Acthung Baby’.

We will be featuring Noir’s work all week on our Facebook and Twitter pages, but in the meantime here is a selection of out favourite works by the artist: