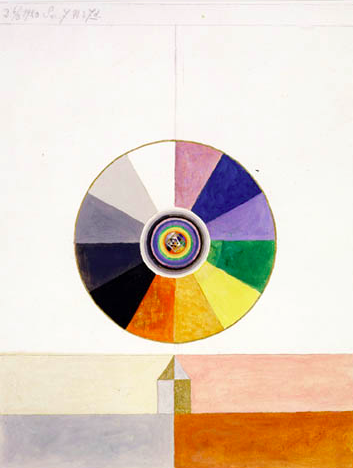 af Klint studied at the Royal Academy of Fine Arts Stockholm, initially focusing her work on traditional landscapes and botanical drawings. However, by 1886 she had abandoned the conventions she learned at the Academy in favour for paintings that attempted to convey the spirituals realms and the occult.

In 1905 af Klint was commisioned to create what is thought to be one of her most important bodies of work, ‘The Paintings for the Temple’. This series of paintings consists of 193 abstract paintings that deal with the dualities between the material and spiritual world, good and evil, man and woman and religion and science. af Klint developed her own unique style of visual language using geometric signs and symbols painted in pale colours to conceptualise invisible forces.

The artist, fearing that her work would not be understood, stipulated that her abstract work should be kept out of the public eye for 20 years after her death. It is only in recent years that af Klint’s work has gained recognition for being before its time in terms of abstraction and the ideas surrounding it. The artist’s rarely seen work is currently showing in London’s Serpentine gallery.

We will be featuring Hilma af Klint’s work all week on our Facebook and Twitter pages, but in the meantime here is a selection of our favourite works by the artist: