Artist of the week: Roy Lichtenstein 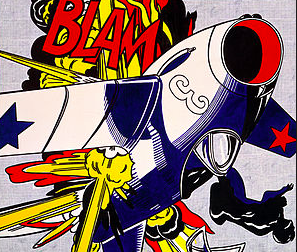 Artist of the week: Roy Lichtenstein

PopUp Painting’s ‘artist of the week’ is Roy Lichtenstein.

Lichtenstein was one of the most influential and innovative artists of the second half of the twentieth century. During the 1960s, along with Andy Warhol and Jasper Johns, among others, he became a leading figure in the art movement ‘Pop Art’.

Lictenstein’s early career involved the artist painting in an Abstract Expressionistic style, however the artist made a breakthrough with his work when he when he adopted his famous comic strip style. The artist initially starting using comics after his son challenged him to create paintings ‘as good’ as the ones in his comic books. Lichtenstein began to use these images to parody the growing consumer culture of the 60’s.

Lichtenstein produced hard-edged and precise compositions that echoed the style of comics and popular advertisements. The artist created paintings, lithographs and sculptures in this style.

‘Woman with Flowered Hat’ had held the record for highest Lichtenstein auction price since May 15, 2013 although that was recently beaten in 2015 by ‘Nurse’.

We will be featuring Roy Lichtenstein’s work all week on our Facebook and Twitter pages, but in the meantime here is a selection of our favourite works by the artist: