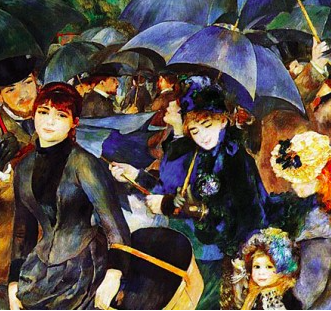 PopUp Painting’s ‘artist of the week’ is the French painter Pierre-Auguste Renoir.

Renoir was a key figure in the Impressionist movement. The Impressionists were characterised by their use of thick brushstrokes, saturated colours and vibrant depiction of light. This group of artists wanted to convey the atmosphere of their subject matter rather than merely copying it, their style was thought to be more expressive than previous art movements.

Renoir’s paintings included landscapes, however a majority of his works focused on the figure, in particular the female form. The artist depicted people in intimate and candid compositions. True to the Impressionist style Renoir used broken brushstrokes and bold combinations of pure colour (often complimentary colours) to capture the light and movement of his subjects.

Lise Tréhot the artist’s mistress at that time was the inspiration for a number of his paintings.

After a visit to Italy, where Renoir encountered works by Raphael, Velazquez and Rubens, the artist changed the direction of his work to a more classical and formal style. However this period of classicism in Renoir’s work was brief and the artist soon returned to his famous loose style of painting.

One of the best known Impressionist works is Renoir’s 1876 ‘Dance at Le Moulin de la Galette’ ,where a crowded garden is depicted in a casual snapshot style.

Renoir is one of the most well-known and frequently reproduced artists from the Impressionist period. The artist lived long enough to see one of his works bought by the Louvre in 1919, a huge honour for any artist.

We will be featuring Renoir’s work all week on our Facebook and Twitter pages, but in the meantime here is a selection of our favourite works by the artist: