Artist of the week: Chuck Close 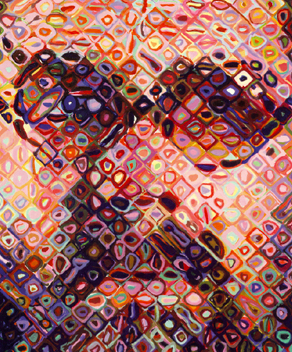 Artist of the week: Chuck Close

Chuck Close (b. 1940) is known for his large-scale, photorealistic portrait paintings. His practice also extends beyond painting to encompass printmaking, photography, and, most recently, tapestries based on Polaroids.

Since the 60’s Close has painted in the style of photorealism, where the artist was known for emulating the smooth, sharp precision of a photograph. However, in 1988, Close was paralyzed from the waist down following a rare spinal artery collapse. After this ‘event’ (as the artist himself calls it) Close continued to paint, but had to find different methods to create his large scale paintings from the confines of his wheelchair. The artist has been known to use a brush strapped onto his wrist with tape and long sticks to create his works. The artist also uses low-resolution grid squares,which, when viewed from afar appear as a single, unified image which attempt photo-reality, albeit in pixelated form. The figures in the paintings appear and dissolve infront of the viewer’s eyes depending on the viewpoint and distance from the painting. Many of the models that appear in Close’s portraits are family members and friends.

Close’s portrait’s normally sell for anywhere between $4-$6 million dollars each. The artist is widely exhibited and MOMA holds a large collection of his works.

We will be featuring Chuck Close’s work all week on our Facebook and Twitter pages,but in the meantime here is a selection of our favourite works by the artist: