Artist of the Week: Yayoi Kusuma 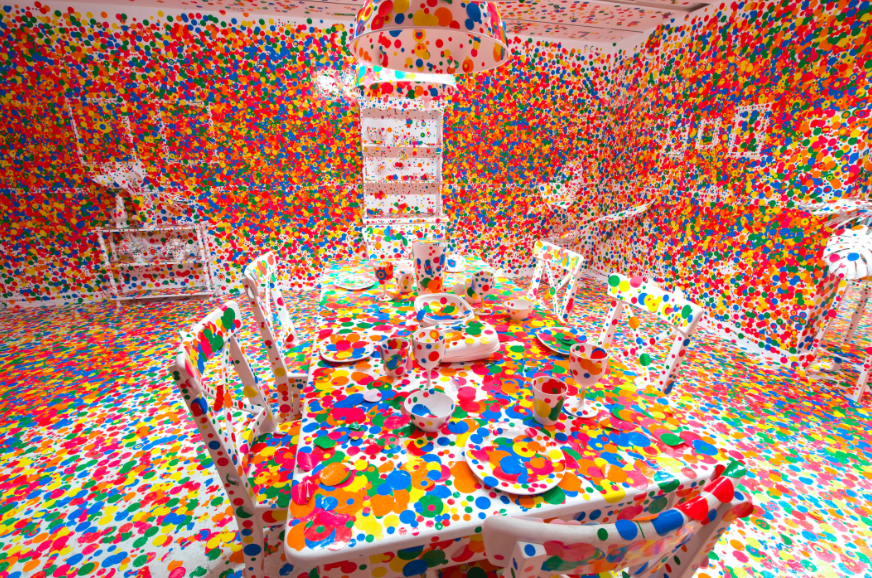 Artist of the Week: Yayoi Kusuma

PopUp Painting’s ‘artist of the week’ is Japanese artist and writer Yayoi Kusuma.

Kusuma, born in Matsumoto City, Japan, first studied painting in Kyoto in 1929. Soon after, frustrated by the lack of diversity of Japanese art, the artist moved to New York City and by the mid 60’s had become one of the most influential artists of the avant-garde.

Kusuma’s seventy year practice, that has consistently pushed the boundaries of contemporary art, has earned the artist the reputation of one of the most important livings artists of our time. Kusuma’s work has shared affiliations with Surrealism, Minimalism, Pop Art, Abstraction, Conceptual art and Feminist art, however, her practice refuses to be pinned down by a singular classification.

Similarly the artist’s use of materials and media is certainly not confined to one discipline; encompassing a wide variety of media including painting, sculpture, environmental installations and performance art. Kusuma’s work is characterised by its use of psychedelic colours, repetition (in particular polka dots and phallic shapes) and pattern. The content of the work is infused with autobiographical, psychological, and sexual content.

After experiencing psychiatric problems in 1977  Kusuma voluntarily admitted herself to a psychiatric hospital in Tokyo, where she has remained until the present day continuing to produce her provocative work, as well as publishing several novels. Yayoi Kusuma has identified as an ‘outsider’ in many contexts – as a female artist in a male-dominated society, as a Japanese artist in the Western art world, and as a victim of her own neurotic and obsessional symptoms.

In 2008 Christies of New York sold a work by Kusuma for $5.1 million, then a record for a living female artist.

We will be featuring this Yayoi Kusuma’s work all week on our Facebook and Twitter pages, but in the meantime here is a selection of our favourite works by the artist: