That’s a good question. Lets try and answer it!

In 1874, an exhibition was mounted by a group of artists whose work had been rejected by the Paris Salon. (The Salon had been considered the only serious place to show pictures at the time.) The exhibition included work by Monet, Auguste Renoir, Edgar Degas and Paul Cezanne artist who are well known today, as some of the greats of Impressionism. The term ‘Impressionist’ was first used as an insult in response to this very exhibition!

Impressionism was made popular by Claude Monet, (and other Paris based artist just mentioned). Instead of painting in a studio they had discovered that they could capture the momentary and short lived effects of sunlight by working quickly, in front of their subjects, in the open air. Impressionist art became a style in which the artist captures the image of an object as someone would see it if they just caught a glimpse of it. Landscapes, and scenes from modern urban and suburban life painted in bright, pure colours are typical often with rapidly applied visible brushwork. 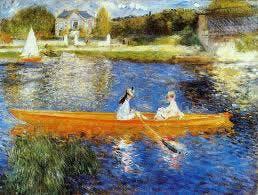 New scientific discoveries in the 19th Century had influenced and encouraged artist to experiment with complementary colours. For instance, in Renoir’s The Skiff (La Yole), he places an orange boat against cobalt blue water. Orange and blue were understood to be opposite one another in the colour spectrum, and by placing them next to each other, each looked deeper and brighter. Impressionist never was concerned with details but more about placing colours that were vibrant and bold.

Manet influenced the development of impressionism. He painted everyday objects. Degas enjoyed painting ballet dancers and horse races. Renoir loved to show the effect of sunlight on flowers and figures. Monet was interested in subtle changes in the atmosphere. Over the next 12 years a further 7 exhibitions was held and a reviewer of the first exhibition described the painters as ‘lunatics’. Strange to think how strongly that reputation has changed, and how admired these paintings are today.

Try out your own Impressionist painting and book your event here!